There’s no such thing as “too many games” for a group of interactive multimedia students who were recently featured as indie video game developers at Philadelphia’s Too Many Games convention.

The group, which bills itself as “In The Snow Studios,” turned a semester-long class project into their first foray into the video games industry. Their puzzle-adventure game titled “Mason and Strings,” stars a girl named Mason who learns how to play guitar with the help of her talking guitar named Strings.

During their weekend-long stay at the Greater Philadelphia Convention Center from Oct. 8–10, the group showcased their studio, networked with other developers, and enjoyed receiving feedback from more than a hundred convention go-ers who played their game.

The team had previously attended the convention as fans, explained senior Patrick Merklee, director of In the Snow Studios, but this time was different.

“We weren’t seen as student developers,” he said. “We were on the same level with everyone else at the show.”

Merklee created the original game along with fellow seniors Jack Brubaker, Thendral Prabu, and Jason Sekora. After the project was accepted into the convention, they enlisted the help of seniors Garrett Bunis, Dalton Hutchinson, and Josh Shoenfelt for extra improvements and expansions. 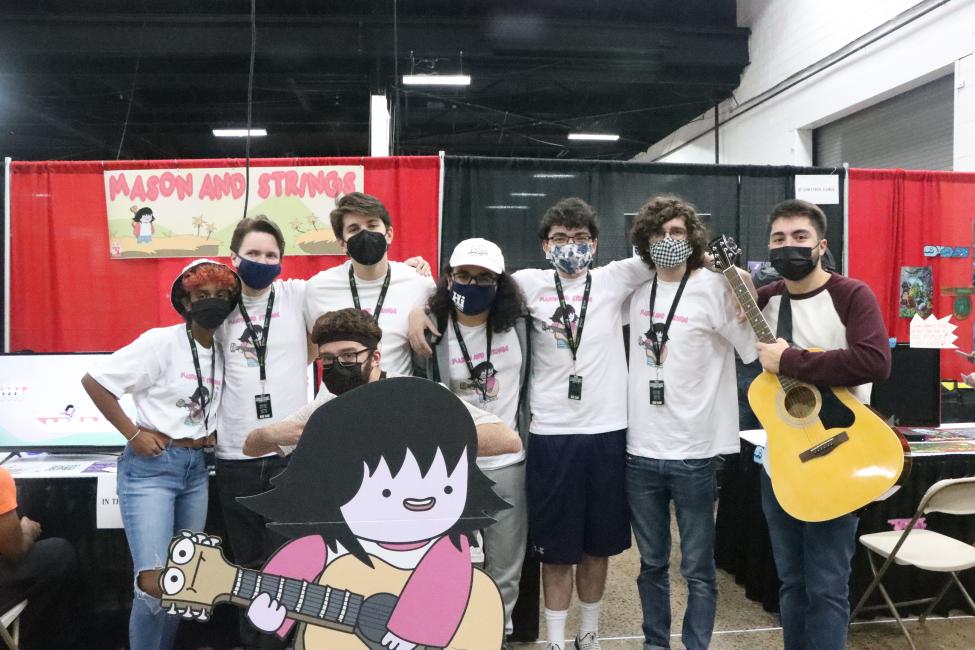 The “chord wheel” is one of the major mechanics of the game, where the player selects a guitar chord and must play the right one at the right time to progress through the level. Collaboration was key here, as the idea was thought up by Brubaker, but then implemented by Merklee. While the soundtrack was mostly created by Sekora, other members of the team also helped with recording and mixing the songs.

“Working on Mason and Strings was a good way to keep our creative spirits alive during the pandemic,” said Brubaker, creative director of the studio. “I think we all needed something to be passionate about. It never really felt like work.”

Mason and Strings is the first project from the studio and the group is currently working on another title as part of their joint IMM thesis project to be unveiled in May. They are also working on perfecting Mason and Strings for its upcoming release on Steam, a major online video game distributor.

“We started off applying to the convention because we thought it would be fun, but now it’s a huge part of our thesis,” said Merklee. “We want to continue this after school and keep making games together and see where it goes.”