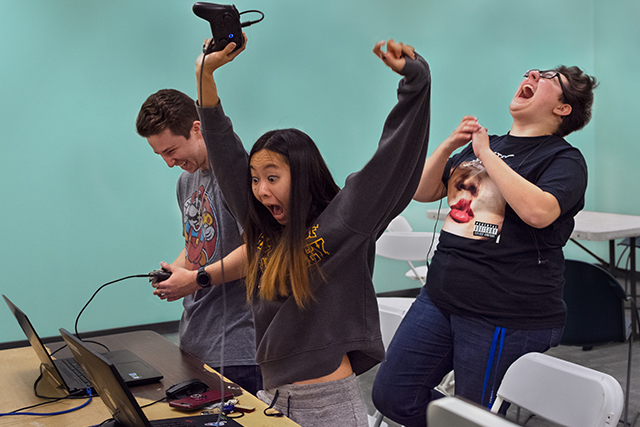 “In the Club” is a series that showcases some of the 230+ recognized student organizations at TCNJ. Want to have your club featured? Drop a line to tcnjtoday@tcnj.edu to be considered for a future story.

As competitive esports continues to grow globally — with estimates the industry will generate $1.87 billion in revenue by 2025 — it’s no surprise that TCNJ has a home for gamers of all skill levels ready to plug in their controllers and press start. We sat down with Alex Reinhard ’23, executive director of Lions Gaming, to learn about the club’s origin story.

Can you tell us a little about Lions Gaming?

Lions Gaming is upheld by its three pillars: community, competition, and career. We focus on community through our events, which are open to everyone at TCNJ and the local community. Then we have our competition through our esports and tournaments, where students compete against other college teams from across the country. Finally, we help build career skills through our work, ranging from leadership opportunities to multimedia production.

What games does the club play?

We have 11 esports teams that play Overwatch, Valorant, Rocket League, Call of Duty, League of Legends, and Super Smash Bros., which is the most popular game across the club. We have some absolutely amazing teams. Our Gold Team in Overwatch has three players ranked in the top 500 in North America.

Do you host certain events on campus?

We host two big events a semester, King and Queen, and then smaller community events every week. King is an esports tournament where we invite people on the East Coast to campus to play Super Smash Bros. Ultimate. Last year we had almost 200 people attend, which after two years of not running because of COVID, was amazing.

Queen is a two-day charity live stream event that is taking place this year on December 3–4. On the first day, we’ll have a Super Smash Bros. tournament at TCNJ and two exhibition matches with our esports Overwatch and Valorant teams against another college. The second day is a 12–hour live stream variety gameshow that will have donation challenges. We partner with a local charity during this event. Last year we raised $2,500 for Trenton Area Soup Kitchen and this year we’re teaming up with Beyond Expectations, a local non-profit that provides marketable life skills through media education, the arts, and youth entrepreneurship for middle and high school students.

Can people stream any of the matches?

Of course! Our biweekly Smash tournaments are streamed on our Twitch channel.

How do people get involved?

The best way to get involved is through our Discord server, where you can take part in our lively community, get live announcements for future events, and take surveys and polls on what events we should hold in the future. Students can also reach out via email at gaming@tcnj.edu.